Market District (Luskan) is a Location in Sword Coast Legends. Settled on the Sword Coast between Neverwinter and Icewind Dale, Luskan was once a bustling port town considered the gate to the wintry north.
Over the past century, however, the City of Sails has become known as a lawless and dangerous town, due in large part to the rise of the ruthless High Captains and their Ships. 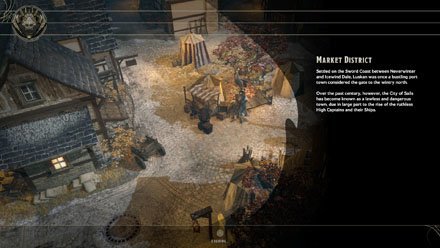 There are many NPCs here to speak with and many vendors. Do a bit of shopping and buy any upgrades you can afford (it won't be many). Visit the many residences around the district and gain some loot. The Search skill will reveal lots of extra loot and a few traps, so be sure to use it here (even in the streets). Once you've had your fill of looting, head to the Guild Hall or the Cutless. The Guild Hall has an armory with an Orange weapon inside Berserker, so it's worth doing. The Cutless has many NPCs and quests to pick up. Be sure to speak to everyone. If you speak to the Cook you will unlock Vitner's Keep on the map. It has the Sunrise Cloak there in a chest behind a hidden wall.

After speaking with the wounded guard, head to the 4 locations on the map until you find the one with Solonil. Help him defeat the Gilded Eye and then head to The Slums.


Videos: Use Links Only. You must be one of our Youtube Partners and follow the guidelines given to add your walkthrough video.